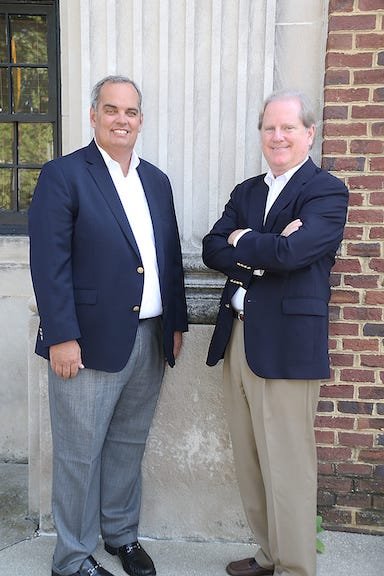 To celebrate its 175th anniversary, the Limestone Agency of Mt. Sterling is Kentucky’s oldest insurance company. Founded in 1847 by William Hoffman, the business has been passed down in ownership through five generations of the Hoffman family. Currently, it is owned and operated by J. Miller Hoffman, William’s grandson, and his partner Ray Robertson.

“We were founded long before anyone thought of putting Abraham Lincoln on a dime,” Robertson said.

“We have an insurance policy dated April 10, 1869,” added Hoffman. The policy, written by William Hoffman, paid $15.21 a month with $800 insurance, and provided $400 in grain, hay and farm implements. Elder Hoffman also worked as a bank clerk in the town of Mt. Sterling when he ran the organization.

“We [still] writing more about agriculture,” said J. Miller Hoffman. “In the past we were controlled by tobacco. It wasn’t just a seed. It was a culture. We have a huge stockpile of tobacco that is underutilized.”

When J. Miller went to work at Limestone Agency in 1981, his father had a friend and three pastoral workers. The organization now has 15 employees and has added an office in Paris.

Hoffman remembers pulling a manual off the shelf, asking questions and doing a little math to arrive at prices for potential clients. “Everything has changed,” he said. “I couldn’t tell you how they calculate the prices now. They call it insurance. “

Robertson said the uncountable prices and esoteric elements determine the prices. “Now, you just have to put it in the reading system and see what comes out,” he said.

Although Limestone has been adapting to technological changes – the introduction of Internet-based phone systems and cloud computing – the company still values ​​face-to-face interaction with its customers. Hoffman says one local organization tried to move its entire business online. “That’s still not working in Western Kentucky,” he said. “This may be the norm in five years, but we love the relationship with our customers and we don’t want to prolong it.”

One thing that hasn’t changed in nearly 200 years of business is the organization’s status as an independent insurance agency.

“Independent agencies are the backbone of commercial insurance in the United States,” said Mr. Robertson, who was the 2020 chairman of the Big I, formerly known as Independent Insurance Agents of Kentucky, and extended until 2021 because of the pandemic. He is now the vice chairman.

An independent insurance agent may issue policies from multiple insurance carriers, while the captive only works with one nationally recognized carrier. Robertson said there are hundreds of licensed insurance carriers in Kentucky.

“We can figure anything out,” Robertson said. Limestone has direct contracts with about a dozen carriers and can go across the pond. In 2019, “we did business with 79 different insurance companies,” Hoffman said.

By working with many insurance carriers, Limestone is able to find multiple quotes with solutions to address business challenges and issues. “Many customers come to us without knowing what they want, need, and need,” Robertson said. “And most organizations don’t do it well.”

Limestone is also a partner in the Keystone Insurance Group. Keystone entered the Kentucky market in 2009, and Limestone joined at the same time. Through Keystone, Limestone has joined a network of 27 independent insurance companies – a partnership in which organizations share their skills or expertise. “It turned us, a small team, into one with the skills of a very large organization,” Robertson said. “Sometimes we just need more information or there may be someone who is writing more information to help people, and we need help with that.”

Keystone also provides technical support to the organization. Hoffman recalled that the Keystone grant helped them find three words to describe the $25 million device. “There were a number of parts and pieces that we couldn’t have put together without Keystone,” Hoffman said. “Keystone representatives will go to Paintsville, Mount Vernon or wherever. We deal with things every day, but when we try to renew the account every year, Keystone is with us.”

Trust remains the foundation of relationships, Hoffman said. “Relationships are bigger than potential, bigger than what carriers you have,” he said. Limestone has many clients who have been with the organization for over 50 years.

Hoffman mentioned a customer whose warehouses froze in an ice storm and collapsed. “We were there that morning, when it was happening,” Hoffman said. “I couldn’t stop it or fix it. But my presence there and taking pictures and talking to them, being kind – it’s a big story. “

Independent agencies also have opportunities to promote their clients. “We had one carrier that would deny their claim, and we felt we had to insure our client because of that,” Robertson said. A technician from Keystone took action, and the carrier paid.

In addition to long-time customers, Limestone also has long-term employees. “Brenda, she’s been here for 52 years,” Hoffman said. “And Cheryl, she’s been with us for 18 years.” Many employees have been there for more than 10 years. “One thing we offer our employees is flexibility,” Hoffman said. He also explained that there are times when workers ask for time off to do things like visit the hospital or want to help a friend who is suffering. He said: “I tell them, ‘just make sure you get along with everyone else and keep going.’

It is this kind of trust and relationship building, whether with clients or employees, that has established Limestone Agency for so long.